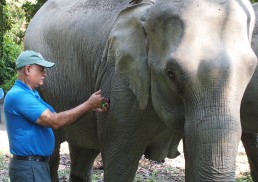 Dr. K.K. Sarma is a highly respected veterinarian and academic, but his interest in elephants began at age 7 when his grandmother adopted a pet elephant, Lakshmi, who lived in the family compound. Later, K.K. went on to pursue a degree in veterinary science, eventually becoming the head of the department of surgery and radiology at the College of Veterinary Science in Assam. Even though his work at the university keeps him busy, Dr. Sarma is never far from caring for elephants. His love of these animals and his adventurous spirit gives him the determination not just to treat captive elephants in forest department camps, but to help any elephant regardless of its location.

A typical day consists of driving long distances to give routine care such as vaccinations, vitamin shots, and foot care, but also includes prenatal care for expectant cows, and looking after newborn calves. It also means trekking through difficult terrain and relocating wild elephants, often bulls in the dangerous state of musth. Dr. Sarma was the first person in Assam to use tranquilizing darts to subdue musth elephants that otherwise would have been shot, thus saving not just the elephant’s life, but the lives of people in the surrounding villages.

Dr. Sarma has also been a key figure in the conservation of the Indian one-horned rhino. Wildlife poachers took advantage of political instability in Assam in the nineteen nineties to decimate the rhino population. Dr. K.K. is a leader in the movement to reestablish a rhino population in Manas National Park. Thanks to this initiative the population there is slowly recovering.

North East India has the last remaining viable wild Asian elephant population in the world. It also has the highest incidence of human-elephant conflict. Dr. K.K. is a major force in the fight to educate people about how to coexist with the elephants and to preserve this magnificent species.